Thomas Rand (Klinik Florisdorf, Vienna, Austria) recently presented on the preliminary results to 12 months of the Motiv bioresorbable scaffold (Reva Medical) postmarket trial at the recent Cardiovascular and Interventional Radiological Society of Europe (CIRSE) 2022 annual meeting (10–14 September, Barcelona, Spain). With the objective of evaluating safety and efficacy for the treatment of patients with rest pain or minor tissue loss due to the presence of lesions of a maximum length of 100mm at the level of the below-the-knee (BTK) arteries, Rand shared in a [email protected] session that at 12 months, primary patency—the efficacy endpoint—was 88%, and the technical success rate, 99%.

The MOTIV BTK study is a prospective, single-arm, multicentre trial, in which 58 patients with BTK artery lesions of a maximum length of 100mm have been enrolled. The study is being carried out on 60 limbs with 76 Motiv scaffolds, Rand specified. The Motiv scaffold has been approved for use in Europe since 2018 when, according to Reva Medical, the device became the first bioresorbable scaffold to receive CE mark for use below the knee.

“The special thing with the Motiv scaffold,” Rand opined, “is that it is sirolimus-eluting and bioresorbable, so you have two good things.” The presenter noted that this is in keeping with the ‘leave nothing behind’ concept. “The scaffold itself is made from TyroCore, which is derived from tyrosine amino acid,” Rand then detailed, and this design is responsible for “low inflammation and irritation during degradation and [no calcification].” The thin struts “have been evaluated as best-in-class,” Rand supplemented.

Moving on to address the preliminary study outcomes, Rand described them as “really very good, [with] a 99% technical success in all patients.” Primary patency at six months was 90%, and the 12-month preliminary result 88%. The limb salvage rate until now at 12 months, as conveyed by Rand was 97%, and the 14% (n=8) death rate was entirely unrelated to the device or procedure. The freedom from clinically driven target lesion revascularisation (CD-TLR) was “a very nice” 98.3% at 12 months, Rand also underlined, with a “decline in Rutherford stages observed during this time.”

“As a conclusion, already, we can say with the Motiv scaffold we had excellent tracking and visibility and a problem-free delivery.” Rand proceeded to emphasise the scaffold’s ease of use and the 90% vessel patency rate, before sharing that the CD-TLR and limb salvage rates remained stable from six to 12 months.

“The major concept behind this study, which I really like, is the ‘nothing left behind’ concept, and this is really fulfilled in this study,” Rand finished by informing delegates.

In the weeks following CIRSE 2022, Reva Medical announced that enrolment in the MOTIV pivotal trial has been initiated at clinical centres in both the USA and Europe. The study, which is being conducted under a US Food and Drug Administration (FDA) investigational device exemption (IDE), will evaluate the use of the Motiv sirolimus-eluting bioresorbable vascular scaffold for treatment in patients suffering from chronic limb-threatening ischaemia (CLTI).

The MOTIV study is a global, randomised controlled trial (RCT) that was designed to evaluate the safety and efficacy of the Motiv scaffold for the treatment of infrapopliteal lesions in patients with CLTI by randomised comparison with standard balloon angioplasty. The study, led by co-principal investigators Ehrin Armstrong (Adventist Health, St Helena, USA) and Andrej Schmidt (Universitätsklinikum Leipzig, Leipzig, Germany) will follow up to 292 patients at approximately 35 clinical centres in the USA and Europe.

Schmidt recently recorded a live case using Motiv scaffolds that was shown at the 2022 Transcatheter Cardiovascular Therapeutics (TCT) conference (16–19 September, Boston, USA). During the procedure, Schmidt implanted three 60mm Motiv scaffolds in a patient with CLTI below the knee, and the patient has demonstrated positive postoperative results.

“The absence of an approved device as a dedicated treatment option for the estimated 20 million patients worldwide suffering from CLTI is a significant unmet need,” commented Jason Ricci (Bellin Health Cardiology Associates, Green Bay, USA), the physician who enrolled the first US patient. “I am delighted to play a role in this important trial and evaluate its potential to advance the science and therapies available to this highly complex patient population.”

“The Motiv scaffold has a demonstrated history of positive clinical results, and I am honoured to have performed the first procedures with the device in this trial,” stated Henrik Schröder (Ihre Radiologien MVZ, Berlin, Germany), who enrolled the first European patients. “The scaffold was easily delivered, and the procedure was aided by visibility of the device under fluoroscopy, which is beneficial to confirm proper placement.” 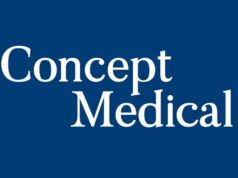