A pilot study of edetate disodium-based chelation in diabetic patients with critical limb ischaemia (CLI) has positive results, leading the study investigators to “cautiously support” the design of a chelation trial in peripheral arterial disease (PAD). This conclusion was presented in an e-poster at the 31st International Symposium on Endovascular Therapy (ISET; 27-30 January, Hollywood, USA) by Francisco Ujueta, and as an oral presentation by Gervasio Lamas (both Mount Sinai Medical Center, Miami, Florida), who has dedicated 20 years of his professional life to the study of chelation therapy.

The study authors note that the National Institute of Health (NIH)-funded trial to assess chelation therapy (TACT) demonstrated a reduction in cardiac events in diabetic patients receiving edetate disodium-based chelation. As CLI carries a high annual risk of death, major amputation and/or myocardial infarction, the investigators tested TACT infusions in 10 patients with both diabetes mellitus and CLI (the latter defined as Rutherford category 4 or 5, with ≥75% stenosis in two or more infra-popliteal arteries, as well as a skin perfusion pressure of 40mmHg in the affected limb) to see if they could improve quality of life and limb salvage.

In this open-label trial, up to 50 TACT infusions were given over one year, plus oral vitamins. Infusions contained up to 3g of edetate disodium, 7g of vitamin C, B vitamins, magnesium, and other electrolytes. Lamas acknowledged at the start of his talk that “until recently, [chelation therapy] has been considered quackery”, but set out to change the audience’s mind through sharing his experiences with the treatment and the positive results of the present study.

In a multi-centre, randomised trial of 1708 post-myocardial infarction patients, patients were given either 40 3g dose of disodium-EDTA, or 40 placebo infusions. Overall, there was a modest reduction in recurrent cardiac events in the active chelation group. Lamas reports that most of the benefit seen in the investigational arm was in the 633 diabetic patients. Over the course of five years, the study investigators witnessed a 41% decrease in major adverse cardiac events (MACE). Breaking this result down, Lamas specifically points to the detected 43% reduction in relative risk of death, in his words the “holy grail of clinical trials”, and to an approximately 50% reduction in risk of recurrent myocardial infarction.

Toxic metals are a known atherosclerotic risk factor. The aim of chelation therapy is to reduce this risk via the removal of toxic metals from the body through the urine. Following chelation therapy, huge increases in the urinary cadmium and lead concentrations are observed, indicating the flushing out of these materials from the body. On average, there is a nearly 4,000% increase in urinary lead and a 700% increase in urinary cadmium after an initial chelation infusion, representing excreted body stores of these vasculotoxic metal pollutants. (see figure 1).

Supplementing this multi-centre data with the story of particular cases in a subsequent, pilot study, Lamas describes the desperation of some diabetic patients with CLI. He told ISET attendees how one patient, after experiencing multiple unsuccessful revascularisation attempts through interventional and surgical means, was scheduled for a below-the-knee amputation. According to Lamas, the patient’s wife found out about Lamas’ open-label experiment in 10 patients and “insisted” that he give chelation a try. After 48 infusions, and no other intervention, the patient was no longer at risk of amputation, and the foot ulcerations and pain had disappeared (see figure 2). Of the pre-treatment and post-treatment images, Lamas said: “These are the kinds of pictures that led me to believe we need to look at this as an adjunct to everything that is being done at this conference [ISET]”.

Lamas informed delegates that the patient’s wife refused to stop chelation treatment, and so he has been getting ongoing treatments from a chelation practitioner.

The poster presented at ISET shows these same results. Ujueta and colleagues conclude: “These findings suggest that TACT infusions in diabetic CLI patients are safe, increase excretion of vasculotoxic metals, may improve quality of life, and might improve clinical outcomes.”

Lamas concurred at the end of his presentation: “Toxic metals are a modifiable atherosclerotic risk factor, and that this may be an idea whose time has come.”

The study was funded by Mount Sinai Medical Center and the James Carter Memorial Fund. Study shows risk of major amputation in diabetics with CLTI 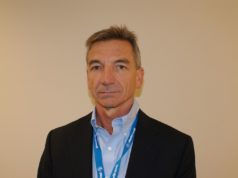